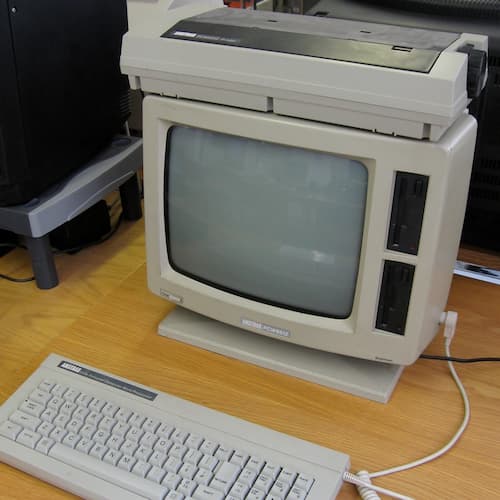 Sign up for a FREE 7 day email course on building an author career.

Unsubscribe any time (but you won’t want to).

There’s a cardboard box in my loft containing fragments of stories I wrote in the 1990s on my Amstrad PCW 8256. Remember those? Beloved of vicars everywhere, Alan Sugar’s cobbled-together masterpiece of technology single-handedly brought affordable word processing to the masses (and, indeed, to the Masses).

I had a mate who’d worked with Sugar back in the day and he told me that no two batches of 8256s were the same because Alan would buy the cheapest – usually out of date – components. Hence the 3 inch floppies. This guy worked on the set of the first Alien movie and some of the fake futuristic computer displays were created with 8256s which were, ironically, out of date themselves even at that time.

One day, I’ll buy an 8256 on ebay so I can load up those partially completed stories and convert them from Locoscript to a format a modern computer can read.

I’m not expecting to find any diamonds in the rough, but it’ll be interesting to see how much better a writer I am than I was twenty years ago.

The one crucial difference, of course, is that these days I finish what I start.

Back then, I was working in a corporate head office, doing a job I loathed.

Today, I spend every morning of the working week writing. I might have my characters wandering a post apocalyptic landscape, but I’m as happy as Larry, having finally achieved my dream.

After throwing away my initial first draft, it took me another six months to begin working on a new novel. This took just as long as the first one, but was light-years better. This became my first published novel – it’s called Myths & Magic and I’m very proud of it.

But I knew that if I wanted a career as an author, I had to learn how to write books quickly and consistently.

So, I tried setting myself a target of five hundred words per day. I calculated that meant around forty minutes of writing, which ought to have been easy, even with my busy job at the time.

And boy, did I beat myself up about it. I mean, what chance did I have of becoming a published author if I couldn’t manage five hundred words a day? That’s only two pages of a typical paperback.

Then, a few days later, I found myself sitting in the car outside the hospital as my wife went in for an appointment. I had my Kindle on me, so I downloaded a book I’d heard about. It’s called Mini Habits, by Stephen Guise. I read it in an hour, and everything changed for me.

Here’s the meat in the sandwich, and the reason you’ve read this far.

It’s not magic and, in fact, the biggest danger is to dismiss this insight as so trivial it’s not worth any further attention.

But it works. It really does.

In January 2017, I committed to writing for ten minutes every single day.

Since then, I have written over 1.5 million words and haven’t broken the chain once.

Some of that is, undoubtedly, my aforementioned stubbornness, but 99% of the credit goes to the ten minute commitment.

Commit to writing for ten minutes a day, every day, and then do it.

Simple, isn’t it? Yep. Simple, and easy. What more could anyone ask for?

Wouldn’t it take a long time to write a novel in ten minute increments?

But it gets better.

The ten minute commitment is a minimum.

Any day on which you write for ten minutes is a success, but that doesn’t mean you have to stop when the timer goes off.

I’ve kept records ever since I started. In that first year, I wrote an average of 559 words per day, for a total of 212,000 overall. Nearly four full-length novels. That was from an average of 20 minutes per day.

To discover the exact technique that turned me from a hobbyist to a professional author earning a full-time wage, just fill in the form below and click the button or tap this link.

This enrols you on my short email course on finishing your novel and building your career as an author. You can unsubscribe at any time if you don’t find it awesome 🙂

And keep your credit card in your pocket – you won’t be needing it, there’s no sting in the tail, nothing to pay.

Sign up for a FREE 7 day email course on building an author career.

Unsubscribe any time (but you won’t want to).